Realme recently launched their third generation of fitness watches in India, and we have the successor to the Watch 2 Pro around our wrist at the moment. The Realme Watch 3 Pro now boasts of a larger AMOLED display, Bluetooth calling and better GPS connectivity at the exact price that its predecessor was launched for. On paper, it looks like a runway winner, but is it? Let’s dig a little deeper. 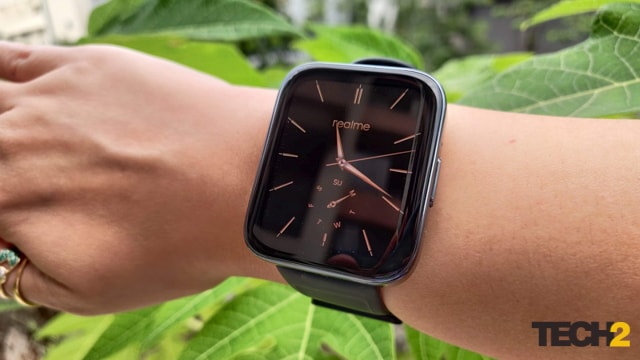 What we liked about the Realme Watch 3 Pro:

Lightweight and comfortable to wear
It has a standard rectangular design, which is neither special nor bad, but the display is slightly bigger than before. Though it is predominantly made of plastic, the build quality is pretty decent. And despite the marginal increase in size, they have managed to keep the weight close to 40 grams with straps, which is good. The silicone straps feel comfortable around the wrist, and there was no skin irritation despite wearing the watch all day. The straps can be replaced with any third-party 22 mm straps.

Larger, sharper AMOLED display with vibrant colours
As I just mentioned, there is a small increase in the display size from 1.75-inch to 1.78-inch, and the same goes for the screen resolution, which now stands at 368 x 448 pixels. That translates to 325 PPI pixel density, which is impressive. The biggest change here is you now get an AMOLED display instead of a normal LCD. The colour reproduction is lively, and so is the sharpness. You get five levels of brightness to choose from. Level 3 or 60% is bright enough when not under the sun, but you need to take it a level up for better legibility under bright sunlight. You either need to flick your wrist or press the solitary physical button on the right to turn on the display. Flick to wake works well most of the time. You have an option to switch off the feature when going to sleep or in a dark room to stop the screen from unintentionally glowing in the dark. This time Realme has opted for some scratch-resistant layer on top of the display but hasn’t specified the details. There were no scratches after two weeks of use.

Easy to use
The watch UI is simple even for new users. You can swipe down for quick settings, swipe up for notifications and swipe left or right to cycle through the widgets like daily activity progress, heart rate, sleep info, weather etc. When inside a menu, swiping right takes you to the previous screen. The physical button can also be used as a back button anywhere except the home screen. Pressing it on the home screen brings up the apps drawer. All functions of the watch are neatly listed there, and the scroll is quite smooth. The UI and transition effects are lag free. Of course, you cannot install any additional apps on this watch, which is pretty much the case with all watches in this price range. The companion app gives you a handful of customisation options like watch faces and enabling and disabling certain features. But we would have preferred a bit more, which I will touch upon later in this article.

Loaded with useful features
The Realme Watch 3 Pro has a bunch of useful features for a budget fitness watch. Yes, its predecessor also had a SpO2 sensor and built-in GPS, but both seem to have improved further on this watch. The oximeter provides accurate readings within half a minute if you keep your hand steady. The readings were at most a point below a regular over-the-counter oximeter, which is acceptable, given that it is meant to serve as a broad guideline and not replace clinical instruments.

Another feature the Realme Watch 3 Pro flaunts is Bluetooth calling, something that’s gaining popularity lately. The watch is Bluetooth 5.3 compliant and you can receive calls directly on the watch, with the built-in mic and speaker doing more than a decent job; almost as good as a phone speaker. However, you will need your phone around for the call to be routed to the watch.

In addition, you get reminders to drink water or get up and move if you have been stationary for too long. The watch has a handful of useful features that include menstrual cycle tracking, music controls, a remote camera shutter, a stopwatch and more. Notifications from the selected apps are pushed to the watch, and the messages are perfectly legible on the watch screen, but you cannot reply back.

Health and fitness tracking generally works well, and the GPS is accurate
The Realme Watch 3 Pro claims to monitor over 110 different fitness activities ranging from walking, running, and cycling, to strength training and certain sports like cricket, table tennis, badminton, football etc. You basically get 16 main workouts and then variations of that. It has a Cywee professional sports algorithm for smarter tracking of sporting activities. You also get all-day heart rate and oxygen level monitoring. This watch has a multi-system GPS chip that does a great job of tracking your outdoor activities. Very few watches in this segment offers this feature. Thanks to it, you don’t need to carry your phone along to track your walk or run. It gets a GPS lock in under 30 seconds when outdoors and retains a steady connection till you get back indoors. The distance tracking was spot on during my walks and jogs. The battery drain is manageable too, with the watch losing about 8 to 9% of its reserves for an hour of GPS usage.

The sleep tracking on this watch is on the money. It tracks your sleep patterns and gives you a breakdown that includes the quantum of deep sleep, light sleep, REM and awake time. A bit more analysis would have been nice but at least it seems to track the duration of sleep accurately. One thing missing in the Watch 2 Pro is available here – stress monitoring. However, it takes a considerable toll on the battery backup. More details of your fitness activities can be seen in the Realme Link app that one needs to sync this watch with before you start using it.

What we did not like about the Realme Watch 3 Pro:

Poor battery backup
This came as a surprise, and not a pleasant one obviously. Its predecessor used to last for two weeks on a similar workload, and when Realme advertised 10 days for the Watch 3 Pro, I expected at least that much. In reality, it only managed 4 to 5 days, that too on a moderate load at best. I don’t think the workouts drain it as much as some unoptimised circuitry inside that keeps drawing a significant amount of power even when the watch is not in use. Case in point, when I started testing this watch, it was raining heavily in Mumbai and I couldn’t step outdoors for 4 days. By the end of day 4, the battery was down to almost zero.

During the second run, after switching off all-day stress monitoring, using GPS for an hour (total) and no calling, it lasted five days, which is still far from impressive. During the course of testing, the screen brightness was set to 3, notifications limited to SMS, 45 minutes of fitness activity for two days in addition to two 30 mins walk with GPS on, heart rate monitoring was set to 5 minutes, two Oximeter readings daily and tracked sleep for 3 nights.  Though there are fitness watches that easily go past two weeks, one week should be the bare minimum these days.

The companion app feels cluttered
The company has opted to make the Realme Link app a one-point destination for all Realme AIoT products, right from syncing, and configuring to buying. As a result, it feels cluttered and can be overwhelming for a new user trying to look for specific things. It can do with easier navigation. At the same time, a more detailed analysis of the fitness data would also be welcome. Right now it feels a bit too basic, and probably doesn’t fully utilise the capabilities of the watch. Not swim-proof
The Realme Watch 3 Pro has an IP68 rating for water resistance, which is good. But that does not make it swim-proof. This ingress protection rating saves the watch from dust and immersion in about 1.5 metre-deep water for up to 30 minutes. So you may wear it during your walks in the rain as it can easily survive more than a few splashes, but cannot dive into a swimming pool with it. A 5ATM (waterproof up to 50 metres) rating is ideal for a watch to be suitable for swimming.

Minor operational issues here and there
These aren’t exactly deal breakers but certain minor issues that the company can look to fix in the future. The watch face collection for the Realme Watch 3 Pro is fairly decent but you can only store 5 of them on the watch including the default one that cannot be replaced. So you only have four slots for watch faces of your choice; a few more would have been nice. A few more customisation options would have been nicer too, like choosing some widgets of our choice, rather than sticking to the preinstalled ones.

One little bug is the lack of any effect on the ‘flick to wake’ option even after enabling sleep mode. In fact, the watch states that enabling sleep mode also disables the ‘flick to wake’ gesture in addition to turning off notifications. In reality, it does not do the former. You have to manually disable and enable it each time. And lastly, when you reach a daily milestone, your achievement flashes on the watch screen for barely 2 seconds before it is gone, and you often miss it. Come on Realme, let us savour the moment a little longer after putting in the hard yards. Price and verdict:
The Realme Watch 3 Pro sells for Rs 4,999 with a one-year warranty. For that price, you get a fairly feature-rich watch with a decent-sized AMOLED display, reliable health and fitness tracking and built-in GPS. While I can let go of the fact that it isn’t swim-proof, the below-par battery backup is hard to overlook. If you are fine with charging the watch twice a week, then this watch is not a bad buy at all.

As for alternatives in this price bracket, the Amazfit Bip 3 Pro is a good option for a thousand Rupees less with built-in GPS. You will have to trade the AMOLED screen for a lower-resolution LCD display, but in exchange, you get much better battery life, a superior companion app and a swim-proof watch. Another possible alternative can be the newly launched OnePlus Nord Watch which looks quite promising in the early phase of testing. It doesn’t have GPS though. Stay tuned for a detailed review of that.

Sun Oct 9 , 2022
Last week Magnus Carlsen, the world chess champion, directly accused Hans Niemann, a U.S. grandmaster, of cheating during their game at the Sinquefield Cup, in St. Louis, Mo. He thus made plain an accusation he had been hinting at for weeks. Carlsen has so far provided no evidence to back […]